When I was interviewing for the Executive Director job at my chamber, an influential board member took me aside and said, “Look, we’re just a small, poor chamber and we cannot afford to pay you what you’re worth and you’d be better off just finding another job.”

This was hard for me to hear because I loved my community and really wanted to work for my local Chamber of Commerce so I could help businesspeople and help the area.

This person was a very successful well-established business owner, and his belief was the chamber was a poor, underfunded organization and it would always be this way.

He had a poverty mindset, as far as the chamber was concerned.

What I discovered, once I was hired by the chamber, was that the board as a whole had this poverty mindset.

We had a culture of lack.

Further, the board members seemed to think of the chamber as a charity rather than a small business. Members were donating to the chamber when they were paying their dues or sponsoring an event.

The chamber used words such as, “Thank you for your support” when asking people to renew their membership or be a sponsor.

Simply put, our organization wasn’t being run as or thought of as a successful small business. It was being run as a struggling, impoverished, charity.

No wonder there wasn’t much faith in our Chamber of Commerce. No wonder people didn’t expect much from it. We had a terrible, poverty stricken, mindset.

What about your chamber? Is it similarly afflicted?

I’d been at the chamber a couple of years and we were starting to get our feet under us with a new CRM, new website, and new benefits of membership.

We were looking for ways to grow the chamber and this little thing called social media comes along. I pitched it to the board, suggesting we use platforms like Twitter and Facebook. I was almost laughed out of the room.

The pushback was hard to believe. I was told that social media is just a fad. I was told we already have a website, and we don’t need to be adding these additional websites as it would “dilute our brand”.

I was told I would just spend time playing online all day not getting anything worthwhile done.

Beyond the poverty mindset, the board was risk-averse and hesitant to change. They were scared of innovating and against trying something new. They lacked boldness.

But luckily my chairman of the board was a risk-taker and he was able to convince the board that we needed to take a chance with new technologies. 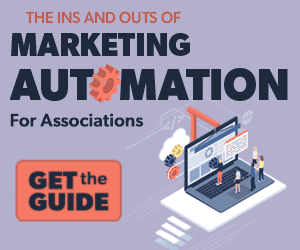 Within 18 months we doubled the membership of that 45-year old organization and were able to do much bigger things for our members and our community.

We were sitting on a ton of potential and we just had to find something that worked for us. In this case, social media did the trick.

This allowed us to finally shift away from the poverty and charity mindset. My title became president/CEO. We instituted a culture of innovation and risk-taking. Of being profitable, even though our tax designation was non-profit.

Remember, non-profit is a tax designation, not a business model.

These shifts of mindset and belief made all the difference.

Watch for Your Chamber Has More Potential Than You Realize, Part 2 coming to the GrowthZone blog next month.

Frank Kenny is an internationally recognized author, professional speaker, and consultant. He is the founder of the Chamber Focus Show and the Chamber Professionals Community Group on Facebook.

Over the past 10 years, Frank has helped hundreds of chambers reach their goals with staff and member training, strategic planning, board retreats and orientations, social media, digital marketing, technology, and more.